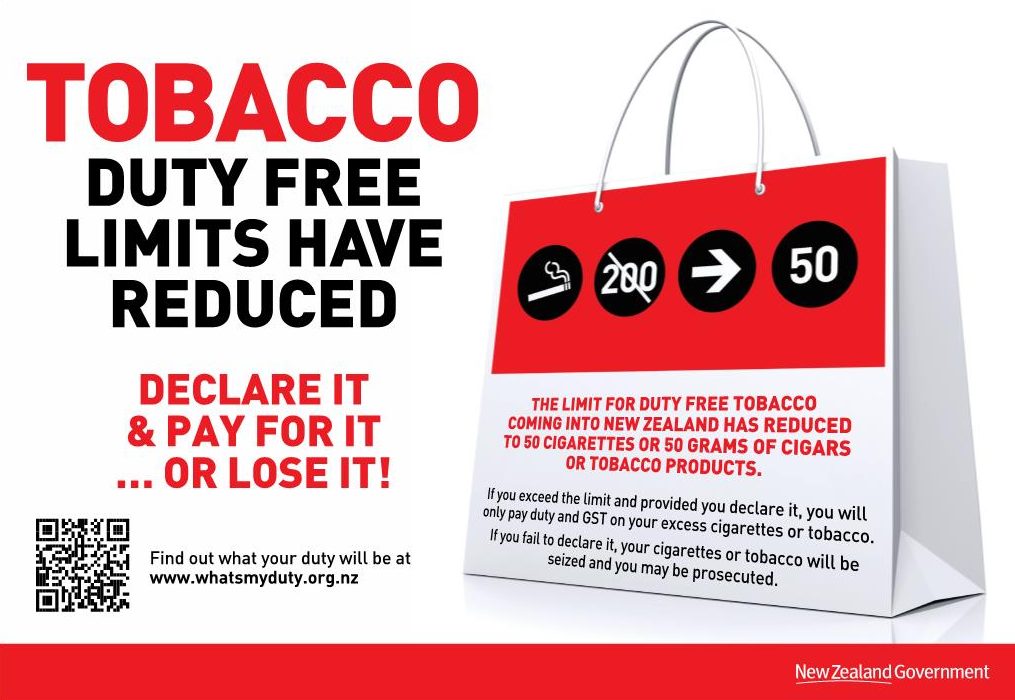 New Zealand Customs officers at the border will be enforcing new duty-free limits for tobacco products from today 1 November 2014.

Travellers will now have to pay GST and duty if they bring in more than 50 cigarettes, down from 200, or 50 grams of cigars or tobacco products. Along with the reduction in the duty-free concession, tobacco will be removed from the gift concession that currently allows gifts sent from overseas to be free of duty and GST when they arrive in New Zealand, providing they exceed no more than $110 in total value.

“The change has been well signalled and people will have the opportunity to declare and discard excess tobacco on arrival. People who don’t must pay the additional GST and duty, or face being fined and having their tobacco seized, and potentially even face prosecution.

“Interceptions of tobacco are expected to increase in the short term and to cope with this, Customs has received 2.7 million dollars this financial year and $420,000 in subsequent years,” Minister of Customs Hon Nicky Wagner says.

The drop in the duty-free limit is another step towards reducing the harm caused by smoking.

“New Zealand’s duty-free tobacco allowance is now in line with Australia’s, and is in step with recent initiatives to make New Zealand effectively smoke-free by 2025,” Ms Wagner says.

“It makes sense for us to match Australia’s duty-free limits for tobacco, given that nearly half of all our inbound passengers come from, or via, Australia,” Associate Minister of Health Mrs Turia says.

The Minister of Customs has informed the Airports around the world about the change in duty-free allowance, the majority of these cigarettes are gifts to people, but today, a decrease in allowance is an increase in health. The new duty-free tobacco limit is forecast to raise $50 million in additional revenue a year for the government.